Yesterday,  elementary students at Swan Hills School were treated to presentations by Alberta illustrator and author, Georgia Graham. Growing up on an Alberta farm and now living on a tree farm in central Alberta, Georgia has a natural affinity for animals and wildlife which shows in the  beautiful and realistic drawings in Where Wild Horses Run among others. Georgia also excels in a completely different style with the humourous cartoon-style images in books like Here Comes Hortense and The Lime Green Secret.

While fascinating the kids by drawing detailed pictures, she told her stories  and showed slides of her illustrations and the photos she took while researching. She showed pictures of herself as a child and her early drawings, and talked about how she had been fascinated with pastels since her mother gave her a set in Grade 4.

Working through pastel drawings of a circle transformed into an apple, a scene with a road through hilly hay fields (from The Strongest Man This Side of Cremona) , a sled dog (from A Team Like No Other) and several others,  she demonstrated how to create depth and perspective in objects and scenes with shadow and light. She described the process involved in creating a book from concept to publication and how she often uses an inspiring true story to ‘tweak’ into a great fiction book.

Division Two learned the proportions and shading techniques of making a realistic portrait and Division One watched her create the whimsical, cartoon-style protagonist of The Lime Green Secret. After each drawing was complete, she drew the name of a student who would take the drawing home. The kids were amazed and enlightened as she laid transparencies in cyan, magenta, yellow and black over one another to create a final image of one of her illustrations from the very popular Tiger’s New Cowboy Books written by Irene Morck.

Students had been introduced to Georgia Graham’s books in library classes and were eager to meet her. They were not disappointed as she fleshed out their experiences with the books and gave them the motivation to check them out more closely on their own, which will broaden their understanding of Alberta, of nature, of people and of life – those things we all gain from intimacy with books.

With their beautiful, realistic depictions of Alberta’s landscapes, several of Georgia’s books are listed in Learn Alberta’s Social Studies Literature Connections (K-12), and more could be added for students studying Alberta in general, various geographical regions, rural life and individual identity. Based on a true story, The Strongest Man This Side of Cremona tells of the destruction of a farm during a tornado that hit the area in 1965. Sweeping prairie vistas and period-accurate illustrations strengthen the story of how the experience must have felt to one small boy.  Sled dog driving is featured in A Team Like No Other,  a story of love and trust set in the spectacular Rocky Mountains.

Illustration from ‘Where Wild Horses Run’ by Georgia Graham

Our annual author visits are partially funded by the Young Alberta Book Society, who in turn are sponsored by many groups and agencies. We pay the artist’s fee only with the money we earn through the excellent local patronage of our annual Book Fair.

Next week is the Junior & Senior High’s turn when storyteller and urban myth exploiter Gail de Vos visits on the 15th.

Promotional Posters by Where the Wild Things Are Author Maurice Sendak 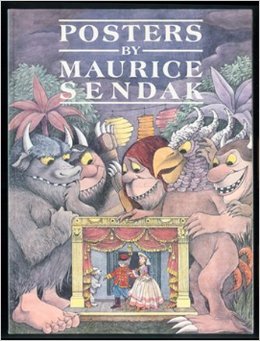 “My Petunia Can Lick Your Geranium”

Wisdom of the Orient Cat

“A beautiful combination of words and images… The poetic text perfectly captures the rhythm of a loon’s life cycle… Readers will respond on so many different levels – to Vande Griek’s lovely use of language and Reczuch’s beautiful images… A magical combination of poetry and illustrations that is both lyrical and scientifically informative.” (link)

A childhood spent with a pencil always in hand has blossomed into a full and varied life for Ontario artist Karen Reczuch. Apart from her here-featured work as a children’s book illustrator, Reczuch has enjoyed extensive travel as part of post-secondary studies in advertising, work in educational publishing and employment since 2008 as artifact illustrator for an archeological expedition in Turkey.

(Click on the above thumbnails for their Goodreads page with reviews, and here for the full gallery of children’s books illustrated by Reczuch.)

“Whether spending an afternoon sketching in a nearby woods or absorbed at my desk drawing an ancient artifact, I enjoy examining and recording the intricate world around me. Time spent drawing and painting is an opportunity to truly “see” and often an exercise in personal discovery and connection, not unlike meditation. My hope is that my work allows others to make similar discoveries and to share the delight of visually exploring our shared environment.”   Karen Reczuch

Clicking on the image will take you to the book’s description on Maira Kalman’s website. Her other books are here.

“Maira Kalman was born in Tel Aviv and moved to New York with her family at the age of four. She was raised in bucolic Riverdale, the Bronx. She now lives in Manhattan.”

In the 2007 Ted Talk video embedded below “author and illustrator Maira Kalman talks about her life and work, from her covers for The New Yorker to her books for children and grown-ups. She is as wonderful, as wise and as deliciously off-kilter in person as she is on paper”. (Ted)