proudly say they don’t read. Unless you want to poop on them. That is allowed, nay, encouraged. Well, at least while you’re still in nappies.

and the rest: A Father Introduces His Newborn Daughter to Books at Book Riot

Embraced by Words by Robbert van der Steeg
on Flickr

The causes, appearances, and effects of the seasonal decay and decomposition of nature, 1837 by Robert Mudie

See and learn more about this fascinating art form at Twisted Sifter.

The Wisdom of Robert Louis Stevenson (1904)  – shared freely at the Open Library along with many other eBooks to read online, download in various formats or borrow.

Books Will Never Be This Beautiful Again 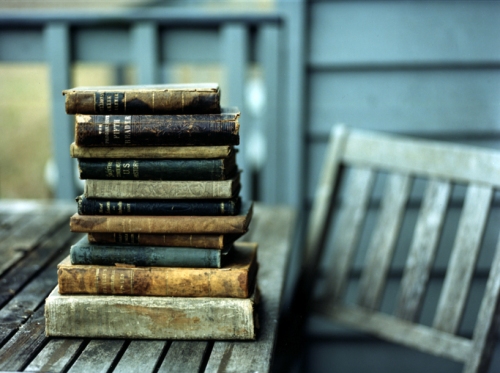 Clicking on the image will take you to Georgia creative photographer Anna’s Gay’s posting on Flickr and I just discovered that she has a blog as well where she posted about this scan of a chromogenic print here.

“The Grimms have often been criticized, especially by critics in the last 50 years, for having changed and edited the tales from the first to the seventh edition. That is, they never lived up to their own words that the task of the collector is to record the tales exactly as they heard them. In other words, various critics have complained that the Grimms’ tales are inauthentic folk tales. But this is a ridiculous if not stupid argument, for nobody can ever record and maintain the authenticity of a tale. It is impossible. And yet, the Grimms, as collectors, cultivators, editors, translators, and mediators, are to be thanked for endeavoring to do the impossible and to work collectively with numerous people and their sources to keep traditional stories and storytelling alive. In this respect their little known first edition deserves to be rediscovered, for it is a testimony to forgotten voices that are actually deep within us. Hence, the irresistibility of the Grimms’ tales that are really not theirs, but ours.” Read more at The Public Domain Review

You can view/download the original book at Wikisource (in German).

Top 10 Most Read Books IN THE WORLD!

“Based on the number of books print printed and sold...”

Click on the image to read the whole book at the Internet Archive.

“While fooling with a gun, Tom Potts shoots a bullet that seems to be unstoppable. A literal hole on each page traces the bullet’s path as it wreaks havoc across various scenes until it meets its match in a particularly sturdy cake. A native of McDonough County, Illinois, Newell built a reputation in the 1880s and 1890s for his humorous drawings and poems, which appeared in Harper’s Weekly, Harper’s Bazaar, Scribner’s Magazine, The Saturday Evening Post, Judge, and other publications. He later wrote and illustrated several popular children’s books, such as Topsys and Turvys (1893), a collection of poems and images which could be viewed upside-down or right-side-up; The Hole Book (1908), featured above; and The Slant Book (1910), which took the shape of a rhomboid and told the story of a baby carriage careening down a hill.” (Wikipedia)

I am so grateful that the Internet and places like the site noted below make these treasures available for everyone to share.

Via The Public Domain Review

Some of the Finalists of the International Book Cartoon Contest in Iran – cartoon all about books and reading. See all 39 at IranCartoon Web