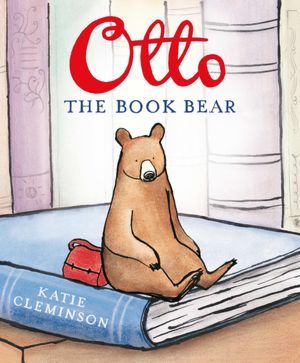 What a joy to imagine that book creatures come alive at night and explore all their interests as we sleep. Even more touching is the thought that they are happiest when we read their books. This was the lesson learned by the Kindergarten students from Otto the Book Bear by Katie Cleminson.

Some students checked out a second book this week. It often takes a while before families get into the habit of returning the books each week, but reminders placed by their PA in the book bags that are given to the children help with this. I’m luckily to have fabulous partners in kindergarten that really work with me to get these ‘beginners’ into the swing of things.

As occasionally happens, I was called away from the library in the period before Grade 1 arrived and when I got back they were already there. Not having had a chance to prepare, I again grabbed Otto the Book Bear and read it to them, since I was fairly sure I hadn’t read it last year. They too, loved the fantasy and didn’t seem to notice that it was not what I had planned for them.

Because we’re on a 4-day schedule and this was a 5-day week, Grade 2 had 2 library classes this week. At the first we played Library Charades. A very helpful PA took each child aside to coach them on how to act out one of the activities that I have printed on index cards. Each activity is either a good thing or a bad thing to do in the library or with books in general.

Charades is perfect for library class, since no sounds are allowed. After the students has acted out the action, the rest of the class does thumbs-up or thumbs-down and the actor chooses one to describe what he or she was doing and why is was a good or a bad thing. While we’re waiting as the ‘actors’ are being coached, I get out the ‘No, No, Never Pail’ and ask for similar response as I pull out greasy chips, scissors, a nice bookmark etc. 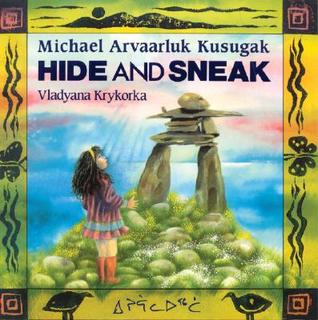 In the second class we read Hide and Sneak by Michael Kusugak, which goes along with their Social Studies outcomes with regard to getting to know Inuit culture. It’s a delightful fable about Allashu, who disobeys her mother’s warning and almost gets hidden forever by the tricky little Ijiraq – an expert at the game of hide and seek. Children love to chant the Ijiraq’s taunt so much that I hear it years later.

As a bonus we managed to work in our monthly character trait when the students guessed that Allashu was showing perseverance when she tried and tried to trick the Ijiraq into taking her home. 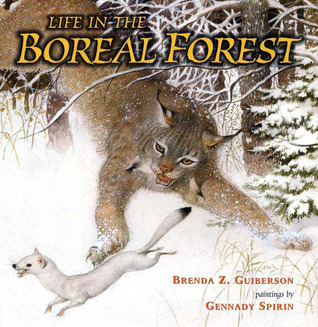 As promised we finished reading Life in the Boreal Forest by Brenda Z. Guiberson. The students were delighted to discover the hidden animals in the beautiful illustrations by Grenady Spirin. We had a very interesting discussion afterwards about the cyclical, interdependent relationship between snowshoe hares and lynx. (And I’m going to flog a neglected blog of mine here, since I wrote about just that relationship, if you’re interested.) The students really enjoyed telling stories about wildlife they have seen.

This class also got 2 library visits this week. In the first we finished Justine McKeen Eat Your Beets by Sigmund Brouwer. Justine had figured out that Mr. Raymond had been feeding the mother cat and her kittens that were living under the shed and so was well prepared to soften his heart while launching her plan to help the animal shelter, the environment and save the school’s money all that the same time. The idea of food waste seemed to be a new concept for most of the students. They continue to check out the rest of the series.

Learning about Alberta is the focus of Grade 4 Social Studies and a spring field trip to The Royal Tyrrell Museum is a well-anticipated highlight. Capitalizing on this, we started reading another Sigmund Brouwer book, Tyrant of the Badlands. Set in the Alberta badlands, and involving dinosaur bones and the Museum, this mystery has captivated previous Grade 4’s and I expect it will again this year.

Before another reading from A prairie as wide as the sea : the immigrant diary of Ivy Weatherall by Sarah Ellis, we looked at maps of the St. Lawrence seaway and pictures of 1920’s Quebec City, where Ivy and her family landed including the beautiful train station where they would have embarked on their cross-country journey. We also looked at and talked about livery stables and rested our eyes on the ‘featureless prairie’ that Ivy’s father woke her up to see from the back of the train car.

I have mixed feelings about using visuals with novels, as I want to encourage them to use their imaginations, but I find that they really respond to them and I believe that it enhances their historical understanding.

Grade 6 was the third class to have library ‘dates’ this week, which gave us a chance to really get into The Breadwinner by Deborah Ellis. We had left the story last week at a cliff hangar – Taliban soldiers had just stormed into Parvana’s family’s one-room home – and students were eager to find out what happened. Before reading we looked at maps of Afghanistan and compared it to Canada. I also showed them before-and-after pictures of Kabul and some of the clothing and furniture that had been mentioned.

The small group lounged on bean bags as they listened with shock and disgust as Parvana’s father was taken from them and as she and her mother were beaten when they went to the jail to try to get him released. In the second class, we did a quick lists on the Smart Board of surprising things that we have learned were legal (like kidnapping and beating people) and illegal (like women going out in public without a man, or a man’s written permission) in Afghanistan under the Taliban.

I was surprised to learn that some students believed that the police ‘made’ our laws in Canada! We discussed it but I’m sure that misperception will be completely cleared up as they make their way through the Grade 6 Social Studies curriculum.

4 responses to “The Week in Library Elementary Library Class”