A School Library Transformed – Part 4: Getting it Done

At the end of the 2011-2012 school year, with the project to convert my K-12 school library arrangement to a modified bookstore model approved and the planning done, it was finally time to get down to work.

Since the entire collection had to be packed up and moved out of the library for new carpeting and painting, I needed a lot of boxes. My principal decided to purchase U-Haul boxes, a move that I at first thought was extravagant, but I quickly came to appreciate. Unlike scrounged retail store boxes, these were all the same size and shape, which made sorting and storing them in order much easier than the alternative.

I labeled each of seven boxes with the working name of one of my new Islands and lined them up on the long counter that runs along the back of my library. At the end of the counter I left space for books to discard.

Not wanting to lift the full boxes any more than necessary I moved to tables when the counter filled up until I could get the them  moved into the classroom where I would be working for the summer.

It’s more important than ever with this concept that students are not turned off in their explorations by dingy, dull and out-dated materials. My new library was going to be all about looking good. The students were to be drawn to the collection like kids in a candy store. Having decided that online resources and interlibrary loan were going to easily replace a lot of the nonfiction that I had previously hesitated to remove despite their sad condition, I prepared to be ruthless in weeding.

Beginning at the 000s, in the general (Grade 3-12) nonfiction section, I began to go through the collection one book at a time choosing first to keep or discard the item. Despite thinking of myself as a good weeder for the past twelve years, I was shocked at the books I had left in the collection. (I only wish I had kept some of the real gems to show you.) The space left at the end of the counter had to be expanded as I went along.

Weeded from the nonfiction

Once I decided to keep a book I chose one of the seven boxes to put it in, continuing that way throughout the nonfiction collection, replacing the boxes as needed. I had students sort the fiction into genres and boxed them up separately, postponing the decision about how they were going to be shelved until after dealing with the nonfiction.

Volunteers helped to pack the picture books and K-2 nonfiction in shelf order. I didn’t know how far along I would get by the end of summer and as I suspected I ended up re-shelving those sections. I am still working on them now.

Picture books boxed up ready to move out of the library

Once the books were all packed up, a few strong volunteers helped move the boxes to the classroom that I was to be using throughout the summer. I had already set up the room for the books to be stored in an organized fashion.

There was a lot of work to be done in supervising the removal and storage of furniture, etc., but I’ll concentrate here on the collection. I drew a large chart on the classroom’s white board with the seven Islands across the top and the first ideas for department divisions beneath. The departments would be determined as all the books for an Island had been unpacked and sorted, ensuring that they were all assigned. I decided that each department would consist of no less than one shelf (thirty books) and no more than four (one stack), although there were areas where I broke the rules anticipating further collection development.

My helper and I unpacked all the boxes for the first Island and literally made piles for each department, adjusting as we went until we eventually determined a final configuration for the Island. Our guiding principle when deciding how the books would be grouped was, “Near what other books would this book likely be discovered?”. It was completely subjective but worked well as I drew from experience; trusting in my knowledge of the curriculum and my students’ related interests. This is where collection needs really stood out and although I did take some notes, I wish I had made a better list.

Once we finalized the chart for that Island, determining final Island and department names and codes, my helper and I sat down at facing computers to make the necessary changes in the online catalogue, print out new labels and apply theme labels as available, as well as adding a colour-coded dot specific to the Island. Then the spines were taped over the labels and the books repacked by department.

Applying over a hodge-podge of old labels made it impossible to be completely uniform, but that doesn’t happen to bother me. (And, yes, occasionally we missed one.)

As each Island was packed back up and the boxes re-labeled, we began the next. Then we moved to the fiction having decided that they would fit into the Islands quite nicely. We were ever-so happy to finish up the last of the fiction as the end of August approached, although we had to make the decision not to start into the K-2 collection until the library was again up and running. (As I mentioned above, I’m still working on that.)

A Word About Labeling

In this icon-flooded world , I did not worry about covering some of the books’ spines with labels. In standing with many a student looking for a particular book in a row of spines, I realized that it is the unusual student who actually reads the title or author from the spines. They are looking for a clue – an image or an icon, which they will find with the new system. In fact the spines actually take on a more uniform look, making scanning easier and encouraging students to pull the books to look at them, which is what I want.  That’s how discoveries are made. 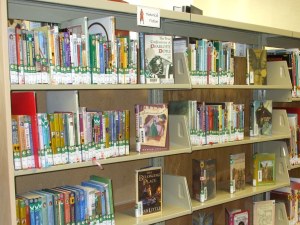 ‘Historical Fiction’ Department in the ‘Canada and the World’ Island

Rather than change the call number itself I decided to add the Island (Loan Code in my software) and department codes to the bottom of the label.  Genre labels are applied as available, but I hope to find the time one day to make my own for Departments that I have not been able to find anything appropriate.

Putting it All Back Together

Our new shelving arrived, some of it badly damaged, about mid-August just before the carpeting was installed. The replacement pieces did not arrive before we had to get it installed so we managed without one wall stack and many shelves that were unusable after the shipping mishap. I can’t really describe what the next two weeks were like; it is all a bit of a blur now.  However, I can’t recommend strongly enough to purchase the installation service with new shelving. With some volunteers and one day of summer student help the shelving took me over a week to assemble and install, with my helper still finishing up with reclassification. 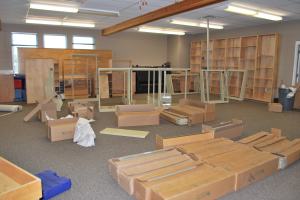 Harder than it looks.

I was very grateful to have the knowledgeable help of Jocie and Cera from Yellowhead Regional Library in the final stages of arranging the shelving in the ‘new’ library. Paper layouts are great, but still adjustments had to be made once the traffic flow was practiced on foot. Jocie and Cera stayed for two days, helping me with so many last minute decisions and getting the books onto the shelves. 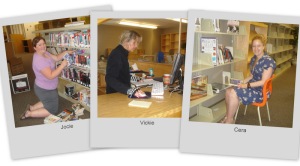 Too busy working to get pictures of every body that helped, but happy to have these three.

We adjusted the departments within the Islands, keeping the shelves no more than half full and the bottom shelves empty wherever possible. All the extra space is taken up with books on face-out display, which happily must be changed quite often. Little-by-little, I am getting more realia (objects) to display as well.

Then the Island signs arrived and had to be hung, and the department signs made. I chose clear images and font to print on card-stock and laminate. I will be making some of them larger now,  (especially for the fiction departments) and include the department code on them. 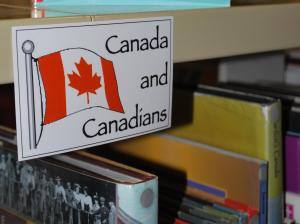 The library was open on August 30th for junior and senior high text book check-outs. At that time it looked finished, although there was still a lot to sort and do; a lot hidden away. It was not essential to have the most departments in exact shelf-reading order, since the departments were small. That had to come later.

A new glitch in the plan wasn’t revealed until school started. A computer lab that is attached and has always been part of the library, was re-purposed as a computer classroom for distributed and distance learning, the computers and tables no longer available to classes visiting the library. I had originally intended for small café tables to sit within the islands and now had to fit in much more seating. Five new tables (may have to get one more) and chairs from the gym.

A little more crowded than I would have liked, but we needed workspace.

The computers will be replaced (eventually) with a mobile computer lab that will be reserved for the library. (I do manage a mobile lab from the library, but it is all spoken-for.) I also hope to eventually have at least four tablets that will be fixed to end panels for catalog searching. At the moment I have two desktop computers and an iPad that students can use to search the library catalog or Internet.

Tomorrow I will summarize this series for an overview and give you examples of other libraries and other articles on variations of the bookstore concept in libraries. Your thoughts, pro and con, on the project are truly welcome.

3 responses to “A School Library Transformed – Part 4: Getting it Done”